Not very long after their inception, VH Blackinton and it's employees were commissioned by the US Government to retool their operations to supply them with military insignia! Thus started their artistry in metal work. As a result, its products earned Blackinton a reputation which spread across the nation.

When the war ended, the shield, a symbol of protection from the days of “knights in armor,” became popular. For this reason Blackinton began creating badges and insignia for police and fire departments. Similarly Fraternal and secret societies sought to have Blackinton craft their identifying symbols out of the finest metals. In addition, Blackinton’s skill in metalworking had the company sought after for the manufacture of hand forged swords. Subsequently Blackinton’s swords competed side by side with the famous German makers. By the turn of the century, Blackinton’s vast array of products could be found on display in almost every lodge room or parade throughout America.

VH Blackinton is still a family owned company to this date. Their operations have expanded to over 60,000 square feet! Their main focus is now on top quality Fire and Law Enforcement badges. Current agencies they serve include:

How they use OxygenPlus Oxygen Equipment

VH Blackinton utilizes quality, high purity oxygen in their assembly process. When assembling their quality shields and badges, part of the process is soldering the pins on the back of the shields. While most of this process is now precision automated, there are times when some badges need to be corrected in order to meet Blackintons strict quality control measures.

Blackinton has been a customer of OxygenPlus since 2010! Relying on our quality rebuilt High Flow 10LPM Oxygen Concentrators, they will facilitate repairs on their badges. As a badge is being repaired, a Blackinton craftsmen will use our Oxygen Concentrators to help de-solder the pins off of their badges by hand, and expertly solder them back in to proper position so they can be properly displayed with pride on our servicemens uniforms.

VH Blackinton is an Eco-Friendly company as well! In an effort to reduce their carbon footprint Blackinton installed a solar field in 2016. The solar field sits on 2.1 acres of their 29.28 acres of property at their corporate headquarters. The installation is a 498.96 KW system consisting of 1,584 solar panels. This initiative reduced our their electricity consumption from the grid by 50%!! Way to go! We love solar panels, too! We have been 100% solar powered since 2017!

Thank you for reading!

What an amazing success story that is currently 170 years strong!

As a business started by a Navy Veteran and also a career Nurse, OxygenPlus and it's staff takes great pride in supporting our Veterans, and our countries First Responders. We take great pride in our great country and those that keep us safe, and feel honored to be able to help keep our customers like VH Blackinton working on their great products for our first responders! 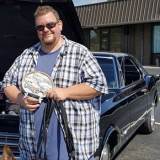 Justin has been working with OxygenPlus since their storefront start in 1993. In 2002 he earned the title of CEO and has been operating OxygenPlus ever since. Most of the time if you call, Justin will answer the phone. He tries to be extremely hands on with most every transaction that takes place. Raised with a very high quality standard, any work must meet his satisfaction before it is approved. He is a classic car enthusiast, loves traveling either for work or pleasure, and is a renewable energy advocate. As of 2015, he saw to it that his personal home, and OxygenPlus Medical run 100% off of solar power.

Comments will be approved before showing up.

Sign up to get the latest on sales, new releases and more …